**Fresh admission can be made in the school throughout the session.
**Admission to children of serving Army personnel coming on transfer from out station can be made at anytime during the year and they will not be denied admission, subject, however to the stipulation laid down by the CBSE in Classes IX-XII. Admission of civilian children to Army Public Schools should not be at the cose of service children, the latter will never be refused admission. Strength of civilian children should not exceed 20% (inclusive of NRI children) of the overall strength in a class after admitting all Army children and also catering for their mid session admissions. However, percentage of civilian children may be increased as elaborated only after ensuring 100% admission of Army children with a few reserved seats for them for mid-session admissions.

Following category of children will be admitted based on Transfer Certificate (TC) from previous school, without an admission test :


**Children who are coming on Pass / promoted TC from another APS / Army Public School / KV between the period 01 Apr to 31 Jul.
**Children who have studied for 10 academic months in another APS / Army Public School / KV and are seeking admission after 31 Jul.
**An evaluation test may be taken in respect of these children to facilitate another academic coaching and allocation and allocation of sections. However such an evaluation test will not be treated as admission test and child entitled lateral admission will be allowed to attend classes within 48 hours of reporting to the school.

TC from other School


**The District Education Officer of the District in which the school is located shall endorse TC in respect of candidates coming from schools other than APS/Army Public School/KVs. The endorsement should clearly indicate whether it is recognized school.


**The minimum percentages for different streams for admission to class XI are given below. Meeting the eligibility criteria on account of minimum percentages does not, however, guarantee admission. Admission will depent on relative merit and availability of seats. No special weightage will be given for any stream to any student..


**Though the requirement of the Central Board of Secondary Education that the All Indian secondary Examination shall be open to people who have interalia attained the age of 15 years on 30th September of the year in which they take the examination has been abolished with effect from the examination of 1983, the age of admission to various classes in Army Public School, however, shall be regulated as indicated below :
As per new policy age limit for admission in 1st class is SIX (6) years. 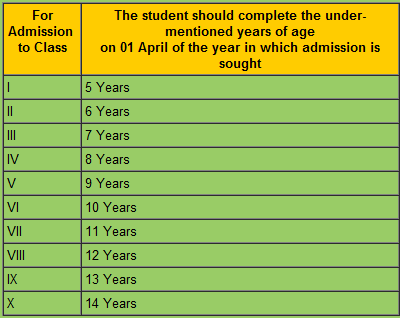 Change in Date of Birth


**Once recorded in the school scholar register, change in the date of birth will not normally be accepted, except where overwhelming documentary evidence exists and where a genuine mistake has been committed.